Lots of parents catch their children picking their noses and tell them off for it – and that’s because it’s gross.

Even though it may be unhygienic and can even be a bit embarrassing if your little ones decide to do it in a public place, most mums and dads think the habit is relatively harmless.

But it turns out picking your nose could spread a dangerous bacteria which causes pneumonia, new research warns.

Here’s why and what you can do to stop it from happening. 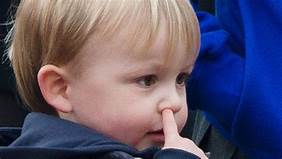 The study, published in the European Respiratory Journal shows that the transmission of pneumonia can occur through contact between the nose and hands when exposed to the bacteria.

Researchers found that the bacteria spreads at the same rate whether dry or wet, or whether people pick or even just rub their noses.

This is scary stuff, as pneumonia is a major cause of death around the world and is estimated to be responsible for 1.3million deaths in children under five years of age.

Even though it’s tricky to get your little ones to kick the unpleasant habit, researchers have some simple advice that may prevent the spread of the deadly bacteria.

“For parents, as this research shows that hands are likely to spread pneumococcus, this may be important when children are in contact with elderly relatives or relatives with reduced immune systems,” said lead researcher Dr Victoria Connor, a clinical research fellow at the Liverpool School of Tropical Medicine and Royal Liverpool Hospital.

“In these situations, ensuring good hand hygiene and cleaning of toys or surfaces would likely reduce transmission, and reduce the risk of developing pneumococcal infection such as pneumonia.”

So basically, keeping their hands and toys clean minimizes the risk – which shouldn’t be too tricky to do with some antibacterial wipes or gel.

Dr Connor also said it “might not be realistic” to get kids to stop picking and rubbing their noses completely – but the presence of the bacteria could help “boost the immune system” of children and “reduces the risk” of them getting the disease in later life.

“It is unclear if completely reducing the spread of pneumococcus in children is the best thing,” she added.